LB’s Justice Quilt and A Child of our Time: A memorial to Connor Sparrowhawk

On Sunday 26 June 2016, an amazing community art project and a music project come together at Warwick Arts Centre to honour the life and mourn the death of teenager Connor Sparrowhawk who died in July 2013.

Connor was sometimes known to family and friends as ‘Laughing Boy” or ‘LB’ for short. He had a way with words and was known for his quirky sense of humour. He loved fun times with his family and wide circle of friends. He adored all forms of transport, especially buses, and produced beautiful drawings and paintings. Connor had epilepsy and was learning disabled and autistic. He died, aged 18, while a temporary patient in a specialist NHS treatment and assessment unit for people with learning disabilities in Oxford. He drowned in a bath following an epileptic seizure. An independent inquiry found that his death had been ‘preventable’ and the inquest in October 2015 concluded that neglect was a contributory factor in his death.

It had been difficult for Connor’s family to discover the truth about what had happened to their son and a sympathetic, voluntary network of people grew up in the UK and elsewhere to support them. Many of those involved have never met Connor or his family but have followed their story and exchanged information through social and other media. They have also been active in calling for better understanding, better rights and better services for people with learning disabilities.

The JusticeforLB campaign has involved many different activities but the arts have been an important element. From 11 am on 26 June, a large community arts work, LB’s Justice Quilt, will be hung from the Mead Gallery balcony above the cinema foyer in Warwick Arts Centre.  The quilt was made from hundreds of pieces of cloth contributed by children and adults in the UK and around seven other countries who wanted to support LB’s family in their fight to find out the truth about what had happened to him. These fragments are embroidered, painted, crayoned and printed with designs and messages about Connor and the rights of learning disabled people. The quilt was made in Coventry by Janis Firminger, Janet Read, Margaret Taylor and Jean Draper. Over the past two years, the work has been exhibited in a number of academic and arts venues as well as Coventry cathedral.

At 6.30 pm on 26 June, Paul McGrath, Director of Music, will conduct the Warwick Chamber Choir and members of the Warwick Chorus in a free, open performance, as they sing the moving spirituals from Tippett’s A Child of our Time. While Tippett was inspired to compose the piece because of the horror he felt at the persecution of Jewish people by the Nazis, he also wanted the music to carry a universal message about the suffering of all who face oppression. Warwick students and staff and members of the public are invited either to listen or to participate in an ‘all-comers’ choir.  The singing will take place in front of the quilt in the cinema foyer.

While the focus on 26 June is on Connor and his family, we also want to draw attention to the widespread violation of the rights of many other people with learning disabilities in this country and elsewhere. Everyone is very welcome to join us, to sing, to listen and to celebrate Connor’s life and the value and validity of lives lived with disability. 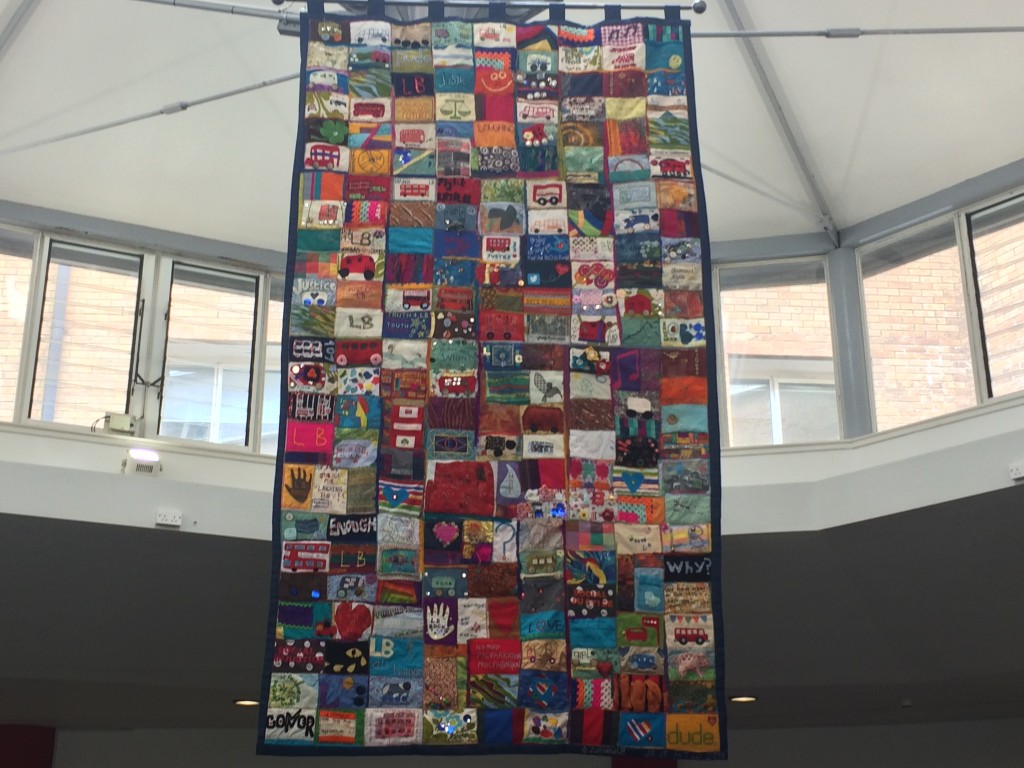