#JusticeforLB briefing on #Mazars report into deaths at #SouthernHealth

WHAT IS THE MAZARS REVIEW?

A review of all deaths of people in receipt of care from Mental Health (MH) and Learning Disability (LD) services in Southern Health (SH) between April 2011 and March 2015.

Learning Disability deaths that occurred prior to the merger of Ridgeway and SH in November 2012 were not in the scope of the review.

It sought to establish the extent of unexpected deaths in MH and LD services provided by the Trust, and to identify any themes, patterns or issues that may need further investigation.

Mazars were ‘asked to benchmark this Trust with other similar organisations where this was possible’.

WHAT THE MAZARS REVIEW IS NOT

‘It is not a clinical case review of each service user and we have therefore not tried to identify clinically unavoidable deaths’.

‘It was outside the scope of the review to verify whether all unexpected deaths were reported as such’.

WHAT WAS THE SCOPE OF THE REVIEW

‘The scope of this independent review was to help secure:

ON AVERAGE HOW MANY DEATHS WERE THERE?

On average 2600 deaths are recorded per year of people who were in receipt of MH or LD services from SH, or who had been in receipt of these services within the 12 months prior to their death.

Most are very elderly and many of the deaths were expected. However, some people die earlier than expected and it is important that these deaths are identified correctly. It is important that the right level of review or investigation is undertaken to improve services, identify any service failure, learn from any mistakes and to provide families and stakeholders with relevant information.

HOW MANY DEATHS WERE THERE IN TOTAL?

At least 10,306 deaths of service users and most were expected. 1454 deaths were reported as ‘death incidents’. 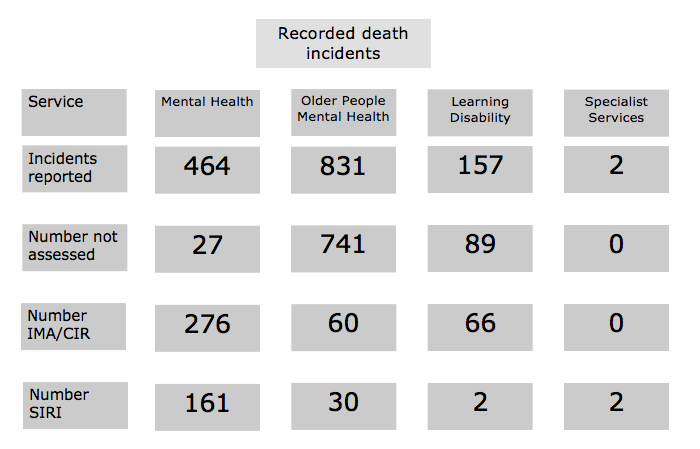 Not all death incidents were unexpected deaths – but 722 were categorised as unexpected.

WHAT WAS THE LIKELIHOOD OF YOUR DEATH BEING INVESTIGATED?

This depended on your needs and the services you used. If you had a learning disability or were over 65yrs old and using mental health services, there was very little chance your death would be looked into.

56% of all deaths in Adult Mental Health were subject to an IMA, 30% of total deaths were investigated as a CIR/SIRI

0.3% of deaths amongst Older People Mental Health services were investigated as a SIRI.

Of 337 deaths of people with a Learning Disability recorded over the four years, two resulted in a SIRI despite at least 47% being reported to Ulysses.

Not all of the service users will have been on the Trust’s caseload at the time of death, although 70% of people with a learning disability who died had been seen within the preceding 91 days before death.

Of the total 337 learning disabled people whose deaths were recorded, 68 had an initial management assessment and there was an absence of subsequent investigation by the Trust in all but 4 of these cases.

There were 9190 deaths of Older People in Mental Health services (9173 deaths over 65) in the period. Not all will have been current service users at the time of death but 81% were seen during the preceding 6 months.

SOUTHERN HEALTH ARE SAYING THAT THEY HAVE EVERYTHING UNDER CONTROL NOW

Last year, 2014/15, there were 2322 (2314 over 65 years) deaths in Older People Mental Health services, only three were investigated as serious incidents by the Trust (0.13%). This is the least amount across all four years. The investigation performance is deteriorating, not improving.

Southern Health have no way of knowing that when a large number of deaths had no investigation at all. 57% of learning disabled people’s deaths reported to the Trust Ulysses system were not assessed in any way.

The Mazars review could not assess every death. We have no reason to believe that Southern Health can be believed in this regard. They said that Connor Sparrowhawk’s death was due to natural causes. The inquest jury found it not to be the case and that it was contributed to by the neglect of Southern Health.

You can download this statement as a full FAQ ‘briefing’ by clicking the link that follows JusticeforLB_FAQs. We use the term ‘briefing’ with our tongues firmly in our cheeks, more on that here.

The Mazars report is available here.

Jeremy Hunt’s written statement to the Houses of Parliament is available here.